Apple watch: All eyes on the hands 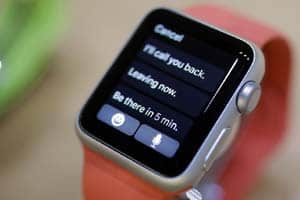 THE APPLE Watch is perhaps the most hotly-awaited wearable yet, and the American tech giant announced more details about it at an event on March 9. At the event in San Francisco, Apple coughed on pricing and release date details for the Apple Watch for the first time, and named some of the third-party apps that will be available on the wearable device at launch. The firm also unveiled its first 12-inch MacBook during the event, which is the thinnest and lightest Apple laptop yet.

The imaginatively-named Apple Watch was first announced during the firm’s iPhone 6 launch event on September 9, marking the company’s first leap into the smartwatch market.

When Apple launched the iPhone, it wasn’t anything that the market hadn’t seen already—touchscreens, smartphones, contacts and calendars had all been done before. But nobody had ever done them quite like iPhone, and nobody other than Apple could put these all together into such a perfect package. With the Watch, eight years on, Apple has done it again.

Launched in a number of variants and two sizes, including gold models, Apple Watch will be available from next month in nine countries; the schedule, however, does not include India. The prices will start at $349 and go above a whopping $17,000 for the gold model. As per industry experts, the Apple Watch is not expected to cost less than R30,000 for the base model when it makes it to Indian shelves.

For those who came in late, the Watch offers a host of features from controlling music to showing stock prices and from dictation to accurate timekeeping, not one of which is a truly groundbreaking feature. There are gimmicks that let users send each other their heart rates, and there’s the option to draw tiny digital notes and send them too.

But these are the least compelling features of a product that Apple believes could be as big as the iPhone. Apple claims its smartwatch delivers up to 18-hour battery life and comes with a unique charging solution that combines Apple’s MagSafe technology with inductive charging for a quick connection.

Apple’s first smartwatch has some distinguishing hardware features, such as a digital crown that can be turned to scroll or zoom on the screen; one can press on this crown to return to the previous page. The touchscreen itself has two-step touch-sensitivity that can understand the difference between a tap and press. Above all, Apple Watch has a built-in mic and speaker using which one can complete a conversation as long as the iPhone is connected via Bluetooth or Wi-Fi.

Apple has used an all-new microprocessor named S1 in Watch, which it calls an entire computer architecture on a single chip. Among the key features of Apple Watch are always-on Siri, tracking users’ fitness, third-party app support and it receives phone calls, as well as iMessages and SMSes.

It can act as a walkie-talkie and operate the iPhone camera, as well as Apple TV. Apple Watch uses an actuator called Taptic Engine to let users know of all notifications and alerts. There is no camera, but the iPhone’s photos can be seen on Apple Watch.

The all-new Apple Watch is, however, compatible only with iPhone 5, 5S, 6 and 6 Plus and can be used to authenticate mobile payments via Apple Pay. Apple has already released iOS 8.2, which features the Apple Watch app that lets users connect the smartwatch to their iPhones.

None of this, however, assures Apple of great success: the smartwatch proposition is based on the idea that the iPhone-maker can once again succeed where every one of its rivals have failed so far. But as with the iPhone, it is Apple’s unique combination of competence and brand pulling power that will decide whether the Watch really attracts the following in millions that many analysts predict will come by the end of the year.

Apple is believed to have asked its contract manufacturer, Quanta Computers, to make 5-6 million Apple Watches in the first quarter.

Supply-chain sources say 50% of this output is set for the entry-level Apple Watch Sports, whereas 30% is for the mid-tier model with stainless-steel casing and sapphire crystal. In comparison, Apple had sold 3 million iPads within the first 80 days when it was launched in 2010.

Apple Watch marks the first new device category to be launched by Apple since it entered the tablet space with the first iPad in 2010. It is also the first new Apple product line to make its debut since Tim Cook took over the reins of the company after Steve Jobs stepped down.

“Apple Watch begins a new chapter in the way we relate to technology and we think our customers are going to love it,” CEO Cook was quoted as saying by the media recently. Really? We will just have to wait and watch.

Romance in the air | The Financial Express

Romance in the air | The Financial Express