A scrap among European Union countries over a proposed tax on tech giants is set to resume on Tuesday, when finance ministers try to strike a balance between luring business and addressing popular discontent about companies not paying their fair share.

Finance ministers meeting in Brussels will try to push forward a legislative proposal for a 3% levy on the European sales of companies with a global annual revenue of 750 million euros ($853 million) or more, such as Facebook, Alphabet and Amazon. The tech industry has pushed back against the tax, saying it would chill investment.

Spearheaded by France, the plan has met resistance from countries such as Ireland and Sweden, which question the wisdom of the EU going it alone given the global nature of digital services. Complicating things further, the tax risks triggering the ire of President Donald Trump in the midst of a transatlantic trade spat, as most of the affected companies would be US-based. 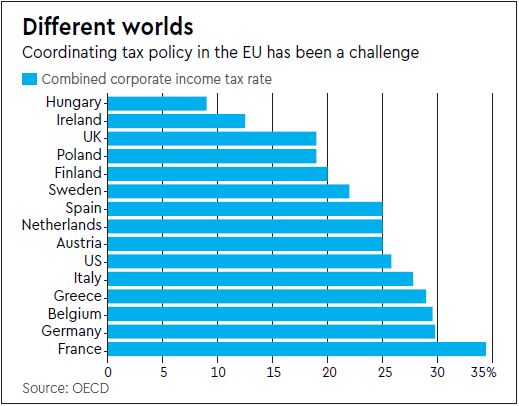 The UK, often seen as a tech-friendly hub, last month announced plans to introduce its own tax on the largest Internet companies, with the goal of raising £400 million ($521 million) a year. Countries from South Korea to Australia are also closing loopholes that allow companies to re-route profits to lower-tax jurisdictions. Traditional tax rules have failed to capture these companies’ activities, fueling anger from voters disgruntled after years of austerity and meager wage growth.

The idea behind the proposed EU tax is to focus on where tech users are based, rather than where a company places its headquarters. The levy would apply on revenue from “targeted advertising” and “intermediation services”, while the tax will be imposed on turnover, irrespective of profit or loss, and won’t be connected to or “creditable” against existing corporate taxes, according to confidential memos circulated among member states and seen by Bloomberg.

Cryptologue with ET Markets: Terence-Hari Fernandes of Lekh Haq explains why artists have taken a liking to NFTs